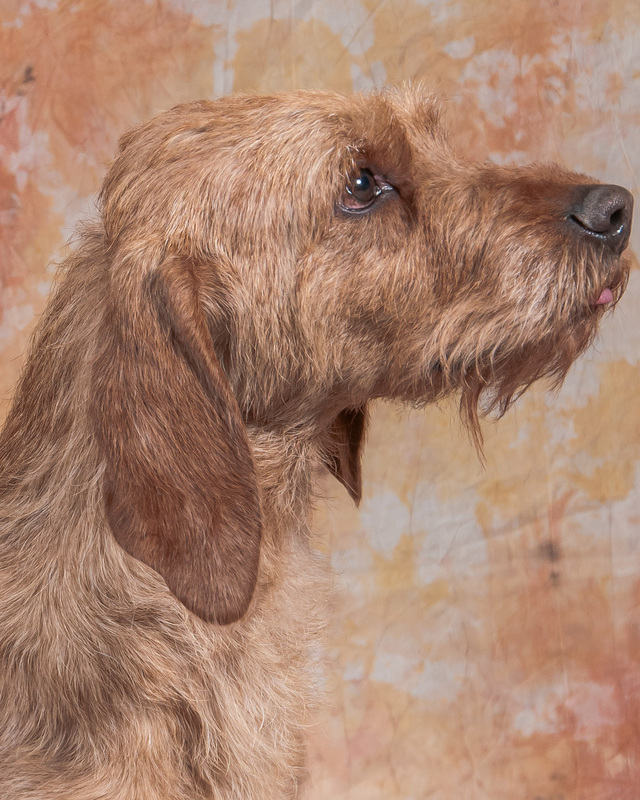 The Basset Fauve de Bretagne is truly an old French Hound, tracing back to the 1500’s when Francois I had a pack of Breton hounds which he hunted regularly.  These Grand Fauve de Bretagnes, which sadly became extinct, but their DNA continues to run in the lines of the modern rough-coated Griffons and Bassets.  The Grand Fauve de Bretagne (Fawn Hound of Brittany) are larger (27.5-29.5 inches) and was introduced to the French court around 1520 by Admiral d’Anneboulde.  In the pack was a stud dog, “Mirraud” and was used extensively by royalty.  Up to the French Revolution, only aristocracy were allowed to keep and hunt with packs of hounds and this was done via horseback.  In 1789, aristocratic privileges were abolished, allowing anyone to own and hunt a hound.  However, most peasants did not own a horse, necessitating a shorter-legged, closer-ranging hunting companion.  The Basset was developed with Bas=low and Set=set in French.

The original Breton Hounds have been preserved over history.  In the 1920’s, Sir John Buchanan-Jardin saw a pack of Bassets being exhibited at a Paris show.  Both sizes are shown today.  How the Basset breed was formed is a matter for debate, but most likely smallest bred to smallest over a period of time produced them.  By the 19th Century, hound packs were made up exclusively of Bassets to hunt rabbits, hare fox, roe deer, and wild boar.

It has been rumored that both the Grands and Bassets nearly became extinct during WWII, but whether due to the dedication of French breeders or not as much of a problem as originally thought, the breed emerged strong in popularity and excellent type by the 1950’s.  The breed remains a popular, versatile hunting hound and family dog in France and is gaining popularity in the United States.

A common concern about Basset Fauve de Bretagnes is that they may develop Primary Open Angle Glaucoma (POAG). POAG is a genetic mutation which causes pressure to build up in the eye, leading to discomfort and vision loss. At the present time, tests are available from two labs for the Basset Fauve de Bretagne (or any breed) to detect POAG status:

Offers the Optimal Selection test that is available to owners and breeders.​ They also offer over 100 other tests for hereditary diseases and breed info.

Offers the ADAMTS17 Exon 11 test that is available to owners and breeders.

Donate to Our Club